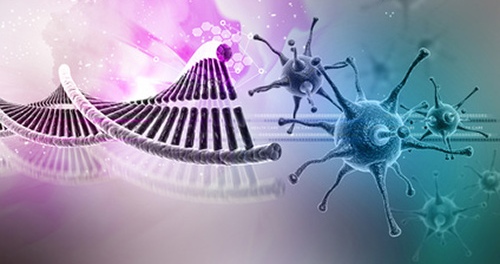 A ladder like strand floats through Timmy’s cellular substance , forming and reforming as its host develops. It’s a happy DNA strand, minding its own business, doing its job by providing a stable building block by ensuring the continuance of Timmy’s genetic composition.   As happy as this strand is, it’s final moment in its existence has arrived. An substance is injected and begins to attack DNA strand, from there I can only envision it shrieking and wiggling with pain. The whole image reminds me of a horrific and overly dramatic scene from the B rated movie, The Human Centipede.   Biologists snip pieces, delete patches, and add new patches to form an entirely different and very unhappy strand.   Timmy’s offspring will now develop a purple bushy tail instead of a long, thin pink one that any normal lab mouse could be proud of.

The tools biologists have used in the past for editing, deleting and replacing DNA has been mediocre compared to CRISPR. CRISPR stands for Clustered Regularly Interspaced Short Palindromic Repeats; In English it is a process that happens naturally to DNA strands. Yet, biologists have learned to replicate this process to snip and splice sections of DNA.   CRISPR easily and precisely manipulates the DNA in the nucleus of any cell. In Timmy the process can be envisioned by a pair of shears guided by the skilled hands of famous hair stylist, Pierre Alexandre.   Theoretically the shears are the DNA cutting enzyme; they snip at the precise point in the cell’s DNA by using a customized guide, a single piece of RNA.   The DNA cutting enzyme is known as Cas9. The genome editing begins as the cell rushes to repair the break made by the shears. This way genes can be corrected or whole new genes added if there is a new section of DNA included with CRISPR. The DNA is patched in during the cellular repair process.   What Pierre has essentially done is give Timmy a haircut, bound extensions to the existing strands of hair, and gave Timmy a wonderful new hair style a…”mouse”…could only dream of.

Where one scientist succeeds another must push the boundaries, by coming near or as close to crossing an ethical barrier as possible. This possibility has every smarter than average collie fiercely protecting their human Timmy’s across the world.   In April of 2015, the first experiment using CRISPR gene editing on unviable human embryos took place. The Chinese scientists were met with hair raising growls from other scientists, and were sufficiently warned of the dangers in crossing ethical barriers by the co-inventor of CRISPR, Jennifer Doudna .

It is not feasible to prohibit research, CRISPR holds hope for sick people across the world. Jiahao Sha of Nanjing Medical University has been quoted saying “Many human diseases are caused by genetic abnormalities. CRISPR holds the promise of curing genetic diseases such as sickle cell anemia, fragile X syndrome, blood disorders, retinitis pigmentosa, muscular dystrophy and cystic fibrosis..” It also may benefit the environment and the human food supply. A molecular embryologist at the University of Bath raises several possibilities that may have Lassie pushing Timmy’s sister to the nearest medical center in hopes of eradicating breast cancer from her descendants. With opportunities such as these comes an abundance of unknown risks to human health. Problems such as: off target DNA (snipping DNA strands in places where they shouldn’t be), genetic mosacism (mixture of modified and unmodified cells).   Ethical problems such as “playing god” and “creating designer babies” are also cause for concern.

While these things may improve with research, CRISPR is not safe enough yet to be used for any somatic cell editing.   If editing the human germ line is to have any clinical future will depend on being able to do it accurately and safely; however, it will also depend on society if it is acceptable or not. Jennifer Douda from the University of California, has recommended steps to be taken to discourage any attempts at producing genome-edited humans. Scientists have called for a moratorium and the convening of a new international meeting to consider a way forward before the technology is used in ways in which people will feel uncomfortable about. For now, Lassie has no reason to push Timmy into the well to keep him safe from human kind, but it would be wise to remain educated on CRISPR. The 20th International C.elegans Meeting will be held on June 24-28th at UCLA.

This article was written by Laurell Morse, a writer for dusk magazine.

About The Serial Scribbler (21 Articles)

In the past, I have held jobs as an artist, personal care attendant, cashier and even a shoe saleswoman. The best job I have had the pleasure doing is being a mother, its full time and the pay is always wonderful. The payoff is not in green but in something far more valuable, the satisfaction of a job well done and the love of doing it. From there, I decided to continue my education. I went back to school and currently working on my BA in Psychology with a minor in English and literature.