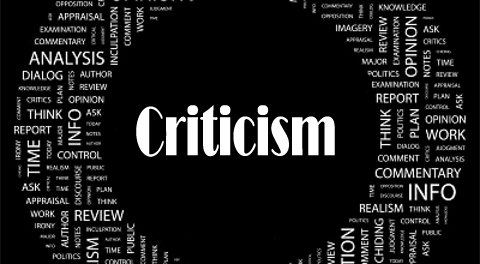 The past few months have flooded airwaves with stories of those who offend and those who are offended. It is worth considering how we, as a society, may be losing touch with an essential intellectual tool, criticizing.

The issue is that we have failed to distinguish among the kinds of things that can and should constantly be criticized and held up to scrutiny and the sorts of things that we ought not criticize or speak ill of. The concept, up until now at least, had appeared more or less self-explanatory; however, it may be worthwhile to actually consider what gives one thing the capacity to seriously be challenged and not others. The distinction is rather simple. Ideas and actions ought to be deliberated, questioned, and criticized. Human beings, or their characteristics, should not be regarded as material up for criticism. Let me elaborate.

Ideas, in any form, must be challenged. If we are truly to value intellectual discourse and strive towards a more progressive society, ideas must be challenged, whether that includes notions like economic systems, theories, policies, accusations, beliefs, etc. Of course, there are numerous ways to go about critiques. One such idea, or more specifically, ideology, could be the topic of religion, something that we are often asked not to criticize; however, if done properly, this could lead to an incredibly fruitful discussion instead of a frustrating standstill. If the true point of conversing is to try to reach a better understanding of reality or to better understand another’s point of view, going into discussions about topics as sensitive as religion can be worthwhile. On the other hand, large generalizations, accusations, or dismissals without deliberation can prove to be counterproductive, damaging the potential for better understanding other stances.

On the other hand, characteristics that are out of one’s control, or that are inherent to an individual ought not to be criticized. These would include qualities such as gender, sex, race, sexual orientation, age, ability, body, etc. This seems self-explanatory, something we’ve been taught early on and for good reason too. These inherent aspects of an individual are not the kinds of things that are to be contested, not because of some abstract decree or even out of political correctness, but rather, it is because of the fact that these emergent properties are nothing more than categorizations that are socially useful, and there is nothing inherently wrong with any of these various identities or traits. None of them make one any better than the other. None of them make any individual a better human than any other. Ideas, on the other hand, are very different.

Ideas can be better or worse. The distinguishing factor, of course, isn’t the speaker of the idea, nor is it the louder voice; instead, the determining factor is how in line with reality a proposed idea or belief is. As long as the endeavor is genuinely one for the sake of finding the truth, a more complete picture of the nature of reality, it is possibly to consider one idea to be “better” than another, just as geocentrism made way for heliocentrism. These are the sorts of mindsets that are, in principle, to be adopted by scientists and philosophers alike, pursuers of truth, those who are willing to suspend their beliefs for new ones if presented with a compelling reason to do so.

The issue with criticizing ideas is that far too many critics begin conflating attacks on ideas with personal attacks. Instead of considering and discussing Jewish or Islamic theology, we fall victim to heated attacks that blend racism with xenophobia, leaving us with anti-semitism and islamophobia. Instead of focusing on issues at hand, politicians lunge for personal attacks. By seriously considering the material that is to be criticized and that which should not, we can begin inching towards the truth and away from ignorance.

It’s time that stop treating criticism like an assault weapon to fire upon anything in sight and begin to treat it like a fine art, something to be studied, applied carefully and strategically, all in an effort to paint a better picture of reality and create a better society in the process.