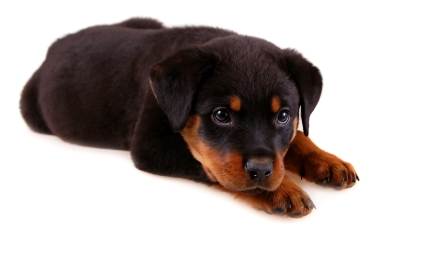 Everyone needs something to look forward to. Circumstances and other life factors are constantly changing. Consequently, people find themselves in cycles that are overwhelming or chaotically dull. Allowing ourselves to anticipate the arrival of something breaks this never-ending cycle and in a way, gives us the therapy no doctor possibly could.

September 17—around 2 weeks away (give or take a few days)—marks the day I will be bringing home Raider.

Raider is sweet. And playful. And a biter.

But who is he, really?

I have no idea. All I know is that he is a six week old male Rottweiler puppy. Other than that, my guesses can only come from the bi-weekly texts his breeder sends me. Truth be told, I know nothing of his personality or what he’s like, but I have no doubt he’s going to live up to his name. It’s a strong possibility he’s going to raid my house, my family, my car, my yard, and a number of others that I didn’t know could be raided—but I know he’s going to prove me wrong.

And what do I know? I’ve never owned a dog. Despite the fact that I’ve been studying the Rottweiler breed for over six years, anticipating what it would be like to have my own, I can’t speak for the one who’s coming to live with me.

All I know is books. I know that Rottweilers, though popularly thought to have originated from Germany, first came from my own “home country”. Italy is where they were first used as Roman cattle dogs that accompanied herds. During the Middle Ages, they were used for bear hunting. In 1899, their first international club was founded, and they have been stealing our hearts since.

It’s true that they are naturally stubborn, rowdy, and, if given the opportunity, domineering. But that’s where the socializing comes into play. As long as they are properly trained and given new opportunities to meet new people and things every day, their unpleasant temperament won’t override their hearts of gold.

It’s evident. I’ve done my research. I’ve bought toys, food and water dishes, and leashes. I’m in the process of buying a giant pillow that will serve as his bed the first year or so. After highlighting, underlining, and re-reading obedience books, I shouldn’t have a problem.

But at this point, all I know is books. All I’ve seen of him is the bear-like ball of fur in pictures.

The real Raider is living somewhere in Southern California. Despite the fact that everything is carefully planned and researched, puppies are unpredictable. He’s going to wreck my schedule and everything else I have for him.

Who are we to say what’s going to happen (especially when we’re anticipating a pet)? Who are we to constantly plan and draw in our minds how things should be?

But this is what makes life beautiful and interesting. The unknown can be a frightening thought, but the mysterious can be full of wonder. The truth is, we don’t know. We don’t understand the great mysteries and wonders of the universe, much less the incidents that will happen with an oversized pet.

We have a belief in what’s to come, and faith that it will work out.

Bringing up Raider, regardless of planning, is filled with mysteries and guesses and incidents I can’t imagine from this point.

All I know is, it’s going to prove interesting.

Regardless of anything else, he’s already raided my heart.

This article was written by McKenna Vietti, a writer for dusk magazine.