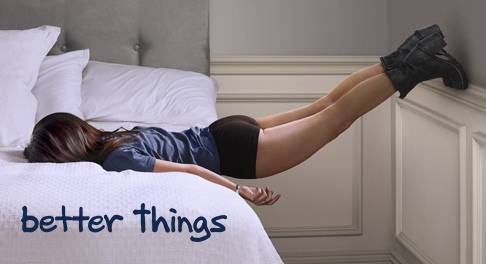 It’s said that humor happens when we’re told “the truth quicker and more directly than we’re used to.” What if it’s slower? Or garbled? Or purposely aloof? Or distracted? Or unspoken? Or not articulated at all? What is truth anyway? It’s a stupid quote, is the point. Anyway, ostensibly, like 93% of all communication is non-verbal, too. I don’t know how a text-heavy, social-media-dominant world skews these measures, but it’s an interesting thought, no? Is the percentage higher or lower? Does typing count as verbal or is this a new category altogether? Presumably, there’s someone on the other end, in real-time; and yet, it’s a different beast, one that infects other interlocution avenues. Credit some corners of TV with gracefully mining language in decline, making creative use of speech stripped of objective function, and zeroing in on a floundering lingua franca chock-a-block with abstracted, distended filler.

In an eye-of-the-storm moment of Better Things’ pilot, protagonista Sam Fox (Pam Adlon, creator, producer, writer, lead, forever-Bobby Hill) cuts short her benign frustration with her snotty, petulant teenage daughter, closes the door and drifts-off into a text-message-stirred hallway revelry. A telling tangle of ellipses are bundled in the moment: a late-night daydream non-sequitor, a flashback breeze breaking the tone, a hookup memory cutting through the domestic, a conversation picked up in the middle and left unfinished. A brief, loaded text back-and-forth ends with a literal flashing ellipsis that disappears with no message in tow. Form and content fuse in a frozen moment; exposition and reprieve intermingle for a time—a small rectangle cross-hatched with another, larger rectangle conveys indecision. Later in the episode, she walks in late to a casting call, taking a seat in a drab waiting room filled with clone petit brunettes wearing black, all rehearsing lines. She chats up a friend and belittles the trite writing and the gravity of the opportunity. The rambunctious tone and the linguistic irreverence-cum-ingenuity unite these moments and others in the series thus far, exigent of the off-hand gut-punch-line of any given scene.

Artistes C.K. and Adlon embrace the uncouth kind of guttural filler nonsense syllable cadence that one’s taught to avoid during those formative years—evasive inarticulateness, unrefined, undulating stammers that approximate verbal momentum. Half-conversations and unspoken thoughts dominate the script—the written record, if it exists, probably reads in passages like some Dadaist syllabic Morse-code minimalism. They commune with the filler and find its significance. The titular winking greener grass optimism is more a nod to variations in interpretation rather than character arc foreshadowing—surviving the pitfalls of modernity is a matter of perspective, after all. Our modernity all but requires we come to terms with “um” and the “like,” and just general hollow gobbledygook that passes for dialogue. Our best lines are toiled over and ejected into the ether; everyday life is the rehearsal for your more-articulate online-self. If you’re going to make a show grounded in the former, the dialogue better be sloppy to boot. Show this stuff to people a few generations back and they may have trouble keeping up and holding interest. Heuristic faculties may be innate, but modern viewers’ are honed to cut glass, abstracted to cover a litany of gratuitous short-hands.

Louie’s pet motifs—stifled communication, mediation confusion—are alive and well in Better Things, but with a more centered side-eye skepticism. It’s autobiographical but not as diaristic. It navigates contemporary frustrations, snags, ellipses, chasms, and confusions, strained through the brain of a known restless creative, but with greater diegetic self-assurance. Adlon does distaff right—not retreating into artsy displacement, embracing inversion but beating the bush in pursuit of a unique path—indulging creativity as a lingering, messy, rewarding compulsion in favor of Louie’s dark fantasia of escapism. Adlon/Fox’s mind is more cooperative than self-destructive, casting Better Things as less introspective on purpose. The sure-fire postmodern premise—letting us in on the gag of mediated modernity and the hall-of-mirrors (plus twee cartoon voice acting) shuffle of projections and fantasy and performance—holds steady. Louie bathed in it; Better Things notes it and tables it for the time being. But, there really is no going back after the Pandora’s puzzle-box of Mulholland Drive, and we know it.

Naked befuddlement, transparent self-doubt, preemptive regret, sincere disinterest, lax engagement, weariness of decorum: All this lurks when face is transposed by screen. Slot Better Things in a wave intent on dismantling small-talk by embracing characters’ inability to sustain it through vérité discomfort comedy. The vast majority of visual media still emphasizes the external; this is shifting slowly as language dissolves into an elliptical rococo patchwork patois. There’s an unremarked-upon poeticism to everyday life these days; this scattered omnibus seems fixated on defrosting the grab-bag glaciation of Kid A, roasting and digesting the lineage of word-soups, from Dylan through Ghostface. Insignificance, anxiety, and regret all loom—a sense that your true self is perpetually hidden, veiled behind layer after layer of mediation, and candid communication is near-impossible—but it doesn’t wholly dominate either, and there’s beauty and comfort in codes, contortions, grunts, and nonchalant uvula jangles.

It’s tricky business trying to highlight the unuttered. Some middle-ground between damaged talkie and pure visual storytelling is being forged—txts on mobile phone screens update silents’ intertitles, and lyrical faces dominate the discourse. The impenetrability of mod-communication is packaged within. Cadence is truncated and clipped until it’s barely outwardly serviceable, only in context does it achieve any function. At points, overburdened physical communication succumbs to shouldering all the weight, and we’re at a loss to read between the broken lines. Frustration in watching it mounts as awkward social interaction curdles in real time, the participants struggling to find common ground in a brief, mandated exchange. We try to fill in the blanks telepathically, to unplug the constipated minds—clogged with wads information and morays—by force of will. What a fascinating mind-meld visualized human insecurity piques.

Personality and wit and relationships are manicured in long-drawn-out exchanges like countless virus strains reworking the molecules of syntax. Writing and editing is a daily requisite—“Gotta think about what wisecrack I’m gonna drop along the way today”—second-guessing and overanalyzing built into the framework of hypermodern existence. Conversation is cordoned and unmoored at once—fit into the parameters of a machine but relieved of predictable pattern. Instead, it’s marked by long periods of consideration, editing, refinement, and silence. Maybe constant contact has made us more patient interlocutors, more discerning and composed. Under pressure of availability comes the necessity of being sly interminably. Add Master of None into the conversation, what with Aziz reduplicating the anxiety of long-form minimalist conversation—holding court over full-fledged round-table analyses of text chains, response times, neo-decorum, deconstructed whimsy, and calibrated ambiguity. A relatively environmentally-friendly alternative to a typewriter and a waste bin. And greenhorn Better Things cohort, Atlanta, manifesting cultural and regional insularity through gradations of dialect and code-shifting.

When one watches old Hollywood fare, the wit and speed of the characters is intimidating and intoxicating, glamorous and impenetrable—beautiful people with impeccably sharp minds in an air-tight tete-a-tete. All that seems pretty exhausting. Modern specs are either more defeatist or more lyrical, depending on the tilt of your head. Asymmetrical, perfunctory scraps, and off-hand references fill the bulk. Languid sentence fragments flutter by unresolved and unfulfilled. Cable TV is finally getting around to the nouvelle vague—some angles of the wasteland are slathered with tasteful collages of overexposed thought processes made visual. Hyperactive minds squeeze out concoctions that pry open the shorted-out circuitry between brain and mouth—the mind’s eye undercut with a bitter chaser of self-doubt and existential fret. At least they’re trying to grapple with the oddity that is thought and the mess that is consciousness. Sobering aesthetics for sobering times, c’est la vie.